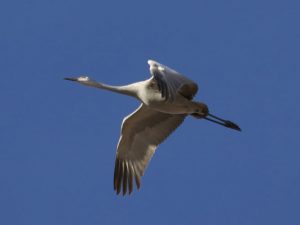 One of the greatest joys I experience when gardening extends beyond my plants to wildlife sightings. Have you ever heard an unusual, high-pitched, trumpet-like sound coming from high in the sky in late fall or winter? If you were lucky enough to be in the right place at the right time, you may have heard a greater sandhill crane.

Beginning at the end of November, and continuing into December, these birds leave their nesting habitat in the northern United States and Canada, migrating to their wintering grounds in the South and Mexico. Cranes sighted in Georgia are members of the Great Lakes population, which extends from the western Great Lakes, Wisconsin and Minnesota to Illinois and Iowa.

Due to wildlife management, sandhill cranes have experienced an impressive recovery, from an estimated 25 breeding pairs in the 1930s to the current population exceeding 600,000. However, there is a new concern amongst wildlife biologists, that the crane’s numbers could fall again as their habitats are being developed, residentially and commercially.

Oftentimes, you hear the calls of sandhill cranes long before you can see them, and sometimes you may never see them at all. Sandhill cranes can fly at altitudes exceeding 1-mile, and their calls can be heard from more than 2 miles away. Unfortunately, if you are not familiar with these long-legged birds, you might mistake them for Canada geese. 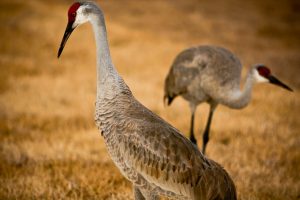 However, if the cranes are on the ground, they are difficult to mistake for geese. Standing upwards of 4 feet high, these gray birds have a wingspan of 6 feet from tip to tip. The top of their heads are red, which is actually red skin, and their cheeks are bright white. If you are lucky enough to see a crane on the ground, you will then be able to truly appreciate their size and beauty. Look for them in the early morning or the late evening, in large fields, golf courses or in open, shallow wetlands.

To help discern the difference between cranes and geese in the sky, listen to the calls made by the birds. Sandhills sound like a rolling “karoo, karoo,” while Canada geese sound more like a musical “ka-honk.” Additionally, cranes have long legs that extend behind their tails when flying, while the legs of the geese do not. Another clue is the V-shape formation of the migrating flocks. While geese typically maintain this shape, the cranes’ formation seems to constantly change. Flocks often fly in long, undulating V-shaped waves, with groups of three or four individuals trailing the main group.

Furthermore, sandhill cranes are very social birds. On migration, their flocks number into the hundreds. They are composed of family groups and unmated birds. While migrating, the travelers constantly communicate with one another. Interestingly, males and females often sing duets as they fly. During migration, the birds may fly as much as 400 miles in one day.

After the fall migration, keep your eyes and ears open again in mid-February through late March as they migrate back to their northern homes. Whether you are a serious birder or not, if you hear the bugling of the sandhill cranes, you will certainly take notice. The migration of the sandhill crane is an annual event for which you do not have to travel to some distant wilderness area to enjoy. Your own yard can give you a front row seat!