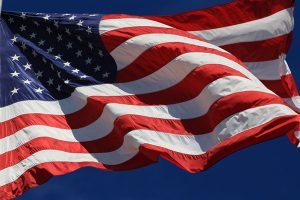 Last week I attended the funeral of my next-door neighbor, Brian Rodriguez. His wife and five children under the age of 11 survive him.

Brian and I were not close friends but we spoke whenever we saw each other, loaned and borrowed tools from time to time and waved when the opportunity arose. At the time of his death I did not know his age (48), place of birth (New York) or that he was a veteran until I arrived at the funeral home and saw the uniformed soldiers.

The funeral lasted just under an hour. Attendance was small, the children were well behaved and Brian’s wife, Elvira, was composed but smiling.
At the conclusion of the service one of soldiers played “Taps.” Then the two-man team reverently marched to the table at the front of the assembly room where Brian’s picture was placed next to an American flag folded and sitting on a wooden stand.

As I watched the careful and precise step-by-step ceremony of unfolding and then refolding the flag into its former tri-fold shape, I found myself literally choking back tears. I’m confident I was not alone with my feelings as I noted the faces of those around me. There was a strong sense of pride among us for what the flag of the United States of America represents and means to a family whose husband, wife, father, son or daughter sacrificed in service for their country. I was not ashamed to stand, to bow my head, to let the tears flow, as did many of those around me.

I doubt our feelings could be expressed any better than the lyrics from Lee Greenwood’s famous song:

“And I’m proud to be an American
Where at least I know I’m free
And I won’t forget the men who died
Who gave that right to me.

And I’d gladly stand up
Next to you and defend her still today
Cause there ain’t no doubt I love this land
God bless the U.S.A.”

As I drove home that afternoon, I remembered my high school friends who went to Vietnam and lost their lives defending our freedom. I thought about the many fallen soldiers who have fought and died in the Middle East and the men and women on our nation’s police force who have been killed defending our flag and country.  I also thought about my father, a World War II veteran who died in September at age 96.  He would have been proud to be at my neighbor’s funeral.

A couple of weeks before Dad died, he and I were watching a Tennessee football game on the television in the Autumn Leaves Memory Care Center in Woodstock. Just before the game began, a singer rose to sing “The Star Spangled Banner.”  Dad was sitting in his wheelchair. “Hey Walter,” he said, “give me a hand will you?” When I asked him where he wanted to go, he quietly said, “I don’t want to GO anywhere. I want to stand for our national anthem.” And we did.

I, for one, am proud to stand for our flag and anthem. It does not embarrass me to put my hand over my heart and struggle to hit the high notes of our national anthem. I am not ashamed to tear up when I hear “Taps,” or get choked up when I see the larger-than-life Old Glory waving in the breeze on I-575 at the RV Center.

After all, I really do consider myself very proud to be an American. Don’t you?