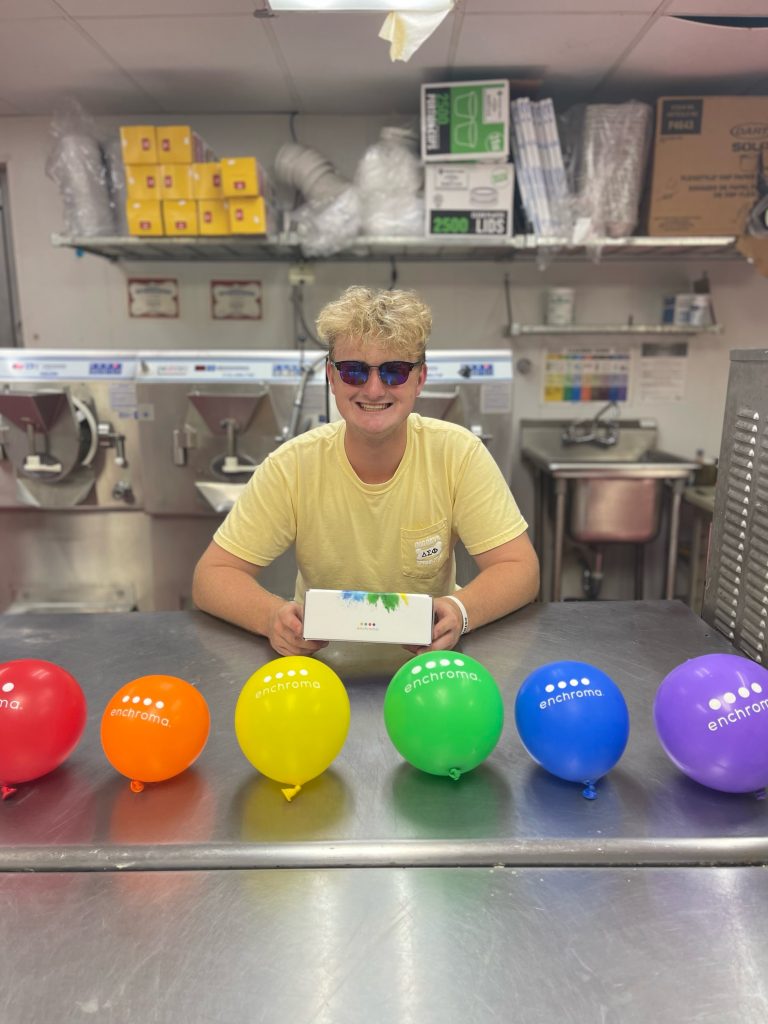 Bruster’s Employee Gets Glasses to See All Colors

For four hours on May 14, Erin Krall and Josh Barrett, owners of Bruster’s on Eagle Drive, donated 20% of sales to buy employee Patrick Kinsella glasses that would allow him to see all colors. Patrick, who is studying biology at Kennesaw State University, is colorblind. He has been working at Bruster’s about two years.

Erin described Patrick as one of the best employees they have come across over the 10 years they’ve been there. “He is very friendly and great with customers. Patrick always is willing to take on more work without anyone having to ask. He is a go-getter and a great leader,” she said.

While working at the ice cream shop, Patrick was always asking which flavors were which if they weren’t labeled, Erin said. “I thought it was obvious just by looking at them, and that’s when he told us he was colorblind, and it was hard to tell some of the flavors apart.”

When Erin and Josh came up with the idea to do a fundraiser night to buy Patrick glasses so he could see all the colors, they were not expecting such a great community response. “We are all very grateful with the turnout of the community. Patrick was speechless when he found out how many people wanted to donate to his cause,” Erin said.

The community was so generous, in fact, that they surpassed their goal, and Erin and Josh are donating the remaining proceeds to a community mentoring program based in Kennesaw: Teach One to Lead One. The program teaches universal principles to lead metro Atlanta students in grades K-12 into a life of purpose and potential, and has worked with students at Etowah High School (https://t1l1.org).

Erin, an Etowah High School graduate, and Josh love working in Woodstock. “Josh and I have seen the community grow so much over the years. We have customers who are coming to us happy and celebrating a special occasion, and some who are having the worst day of their lives. We strive to, no matter anyone’s situation, have everyone leave happier than when they came,” Erin said.

In just four hours, generous and enthusiastic members of the community left Bruster’s a little happier than when they arrived, and so did the employees. “Patrick was very grateful and excited. It was definitely a very emotional night for him,” Erin said.

Patrick’s EnChroma colorblind glasses arrived in June. The lenses make colors visible, so Patrick can see the vibrancy of reds, oranges, blues, purples and greens, according to EnChroma.