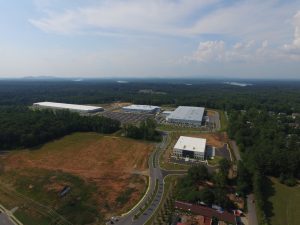 Provided by the Cherokee Office of Economic Development

Property values are going up.  The millage rate is going down.  Taxes are always a topic of discussion within any community.  But what’s missing from the conversation is how Cherokee corporations and businesses are keeping taxes at bay by contributing to the education of our children.

“A key to the economic success of any community is the diversification of the tax digest,” said Marshall Day, chairman of the board for the Cherokee Office of Economic Development (COED).  “And the corporations located within our parks, the Canton-Cherokee Business and Industrial Park, Airport Commerce Center and Cherokee 75 Corporate Park are helping to do just that.”

Based on projections for 2016, businesses housed in those three COED industrial parks will generate $1,445,775 in tax revenue dedicated to the school district coffers.  Broken down, that equates to the starting salaries of 34 new teachers or the general administrative costs of 6,571 students.  And although the money hasn’t been earmarked, one of the goals identified in the district’s 2016-17 tentative budget is to hire exactly 34 new teachers to help with the growing student population.

“We utilized the downturn in the economy to plan for the future and for the return of the real estate market,” said Misti Martin, COED president.  “The end result is we now have a new development, Cherokee 75 Corporate Park.  It’s going strong, helping to create new jobs for our residents and generating tax dollars to support our community.”

The Cherokee 75 Corporate Park has yet to have its official grand opening, but it’s more than 50 percent occupied.  Cherokee 75 spans 171 acres and is located off Highway 92, just two miles from Interstate 75, in the southwest corner of the county.  Inalfa Roof Systems was the park’s first tenant and announced plans to expand just one month after its first facility became operational.  Inalfa’s investment has already created 374 new jobs and more are expected.  MSK Covertech, Inc. came next.  It chose the park for its new North American headquarters, bringing 30 jobs with salaries ranging from $50,000 to $120,000.  ThyssenKrupp Materials NA, Inc., is the park’s latest tenant.  It recently moved into a 304,000-square-foot facility owned by Rooker, an Atlanta-based real estate development firm.  The Rooker multi-tenant facility is the first speculative building constructed in Cherokee in eight years.  It doesn’t stop there:  Jaipur Living has just broken ground on its new North American headquarters, set to open in 2017.

Other developments are in the works as well.  Look for announcements soon on how the Woodstock campus of Chattahoochee Tech is being transformed into a venue like no other in the region or state, once again sending the message that Cherokee County is a great place to live and work.  “Cherokee has an educated, diverse and talented workforce.” said Martin.  “Every time we’re able to locate or expand a business here, it creates an opportunity for our residents to work in their home community.  But it also generates additional revenue to help educate our children, and our children are our future workforce.”