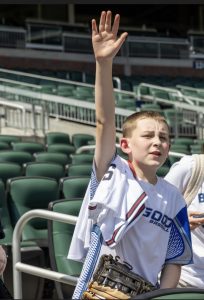 11-Year-Old Describes a Day With His Friend Dansby Swanson

Parker Grantham, 11, was nominated by Hobgood Park for the WellStar Positive Athlete of the Year Award recently and was chosen to participate in a tour of Truist Park and a meeting with Atlanta Braves shortstop Dansby Swanson. The tour took place on Sept. 16 and ended with Parker meeting the star player just a few hours before the Braves faced the Philadelphia Phillies. Parker attends Dean Rusk Middle School, and was one of eight young people chosen from Cherokee and Cobb youth leagues to meet Swanson.

Meeting Dansby Swanson
The day I met Dansby Swanson was the best day of my life. When I entered Truist Park for the tour, I saw the coolest Lego figurine of a tomahawk. Then, we explored the stadium, and it was awesome to see. My favorite part was Chipper’s Corner. After the tour, we got to sit behind home plate, and that’s when Dansby Swanson came out! I got to ask him, “What is it like to play under the big lights?” When I got to go into the dugout with him, it was the greatest day of my life! I asked him to sign my Swanson jersey, and he said, “I have never signed a jersey before.” I thought it was so cool I have the first jersey he has ever signed! After we all got to sit with him individually, he let us sit in the dugout and talk baseball with him. He told us to “play hard, play to win and love the game.” That day was a day I will never forget, and I will always remember what he told us, especially that we can tell everyone he is our friend! Dansby Swanson is really easy to talk to, and he is a role model to me, because I want to play shortstop just like him.
— Parker Grantham

Mom’s Point of View
From a parent’s perspective, watching my son be able to meet and talk to one of his idols was an incredible experience. I loved watching his face light up and beam with joy. I could see the awe in his eyes. Dansby Swanson talked to the boys like they were truly his friends; because of this, I don’t think Parker realized how big of a deal it was to be able to sit down and talk with him. For a player of his caliber to take time out of his day, especially hours before a game, it showed how kind of a person Dansby is. He was so humble and gave all of the boys such great baseball advice. I am sure they will all carry what he told them with them through their many years of playing baseball. Parker continues to talk about his day at Truist Park and meeting Dansby Swanson, and says it was the best day of his entire life.
— Morgan Grantham