When it comes to the dreaded disease of TMS (Too Much Stuff), people come in three categories: hoarders, collectors and clutterbugs. Hoarders can’t get rid of anything, from old trash to newspapers from 30 years ago. Collectors are only interested in certain things, but often get carried away. Clutterbugs are the most common. They want to get rid of stuff, but with so much to clean and sort through, it’s easier just to sit down and watch Netflix for the afternoon. I hover between collector and clutterbug. For years I collected DVDs. I was discriminate, but felt the need to build a massive DVD library. Now I just want to simplify my life. 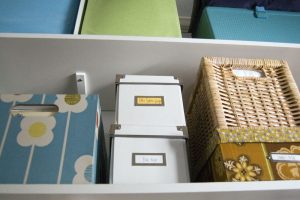 Perhaps you’ve got a room in your house that you would love to make a guest room, or a craft room. You’ve dreamed for years of clearing it out. Or perhaps you are tired of walking a narrow path of boxes and assorted junk just to get to your closet. Don’t worry, you are not alone. And together we can get through this.

The problem many of us have is that we don’t want to simply remove the stuff and throw it away. We want to put it to good use, maybe even make a few bucks off of it. The first thing you have to realize is that you can’t, absolutely CAN NOT, keep it all. You may think you want or need everything in that pile, but you don’t. You must accept the fact that you have to reduce the amount of stuff you own. Simply stated, you can’t have everything in life. Where would you put it?

We found boxes of our kids’ old clothes. Some people think they can save them until, years from now, they have grandkids who might need them. Wrong. It’s far better to sell or donate the clothes now, and don’t worry about the vague, uncertain future where you might have grandkids who might want some old piece of crap you’ve been storing for years. Let the future worry about itself. You’ve got your own life to live now. Plus, that old toy or clothing could be enjoyed by someone now, instead of collecting dust in a box somewhere. Unless it has sentimental value, donate or sell it.

Let this be the year you declutter your life. Don’t leave it to your kids or grandkids after you’ve passed on. Anyone who has been through that knows how difficult it is. Getting rid of old stuff can be mentally taxing, but the end result gives you a feeling of exuberance that refreshes your soul.