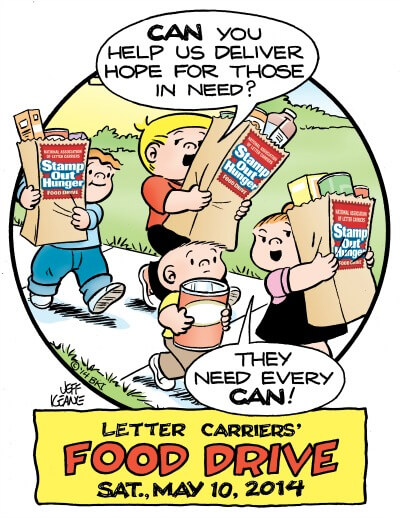 The National Association of Letter Carriers (NALC) of the United States Postal Service, including our own Towne Lake carriers will be conducting its 22nd annual nationwide Stamp Out Hunger! Food Drive on Saturday, May 10th. Stamp Out Hunger! is the nation’s largest single-day food drive.

Last year, with the help of thousands of volunteers, letter carriers all across America collected more than 74.4 million pounds of non-perishable food—the second-highest amount since the drive began in 1992, bringing the grand total to just under 1.3 billion pounds since its inception.

Making a donation is easy. Customers should leave their non-perishable food donations in a bag near their mailbox on Saturday, May 10th, before their letter carrier arrives. Food collected during the drive will be delivered to local community food banks and food pantries for distribution.

While all non-perishable donations are welcome, foods that are high in protein such as canned tuna, salmon, beans and peanut butter are most needed. Canned fruits and vegetables, whole grain, low sugar cereals, macaroni and cheese dinners and 100% fruit juice also top the list of most needed items.

According to Feeding America, the national network of more than 200 food banks, 49 million (1 in 6) Americans are food insecure, nearly 16 million (1 in 5) children are living in a food insecure household, and 4.8 million seniors (age 60+) face choices between paying rent, utilities and having enough nutritious food.

Do your part to help ‘Stamp Out Hunger’ by donating on Saturday, May 10th. For more information visit – www.nalc.org/commun/foodrive/ or view the video below.