In 2016, we were happy to see an entry in the TowneLaker on the growing popularity of the sport with the “funny” name. This year, we are proud to report that, according to The Economist, pickleball is still the fastest growing sport in the United States! It began as a family recreational sport in 1965, and, today, there are professional leagues in the U.S. and around the world.

One of the reasons the sport is so popular is that it’s easy to play a game, or several games, at courts offering open-play pickleball. With an open-play format, all you need to do is show up, find the court that is matched to your level of play, and wait for your turn to jump in and join the fun. The game can be fast or slow, depending on skill level, and most participants are hooked after just one game. Many describe pickleball as a game of outdoor ping pong, played on downsized tennis courts, so hand-eye coordination is key to success.

Pickleball at the local level is usually a grassroots initiative. For example, as a Cherokee County newbie in 2019, I (Linda) reached out to the homeowner’s association (HOA) in Brookshire, to see if there were any dedicated pickleball courts, or dual-purpose tennis courts. The answer was no, but the search continued. After discovering that the Cherokee Recreation and Parks Agency had two dedicated pickleball courts at Cherokee Veterans Park, the effort to persuade the HOA was renewed, successfully. Two tennis courts were dual-purposed for pickleball, which means that the borders of the pickleball court are painted within the tennis court borders, and an adjustment is available to lower the net to the height of 34 inches, 2 inches lower than a tennis net.

In 2020, ambassadors from the USA Pickleball Association in Cobb County held a clinic in Woodstock. Ambassadors are county-level volunteers dedicated to promoting the sport from local to tournament levels. In April, Brookshire sponsored a pickleball social, with around 40 residents and friends participating. Today, you will find a group of regular players meeting at least weekly to enjoy a game of pickleball in the Brookshire neighborhood. In June, plans began to organize ladder play, which is age and skill level-matching among players, as well as challenging other subdivisions.

Cherokee County and subdivisions have built courts over the past few years. Dupree Park in Woodstock has two courts, and offers lessons for beginners, along with a summer mixed doubles adult league through Aug. 30, thanks to a new Woodstock Parks and Recreation program. Kenny Askew Park in Canton has six dedicated pickleball courts.

Pickleball also can be played indoors, keeping church and public-access gyms busy. The YMCA in Canton is bustling with indoor pickleball at designated times during the week.

We believe this game with the funny name is here to stay for a long time. It is fun for all ages, an easy game to learn, and a challenging one to master. Players from all skill ratings can play together and have a fun match, or simply enjoy a healthy outside activity for all involved.

—Mike and Linda are trying to “promote a good, positive outdoor experience for the community.” Visit the Pickle Brookshire page on Facebook.

Tennis vs. Pickleball: What’s the Difference?

Pickleball and tennis often are compared; they are played on the same courts, after all. The pickleball nets are lower, and the court boundaries are smaller, so the sport is easier on the knees than tennis. While aerobic, pickleball is just as much a game of strategy as it is athletic ability. To give us a better understanding of the sport, Mike Walls compiled a list from Pickleball Kitchen (https://pickleballkitchen.com) and added his insight on the major differences between pickleball and tennis.

Currently, Eagle Watch has six temporary pickleball courts at the main tennis facility. Plans for six permanent courts are in the works. Eagle Watch offers a wide range of programs to meet the growing needs of the pickleball community from Woodstock and surrounding areas. The Eagle Watch pickleball program offers four-week Introduction Into Pickleball classes on Monday nights, intermediate level round-robins with drills on Wednesday nights and Friday mornings, and open rec play on Sunday nights. Plans for leagues and ladders are coming!
It is a great opportunity to learn about the game and meet new people. Participants of all levels are welcome to attend. Sign-up and information is available at www.eaglewatchtennis.com/ew-pickleball. 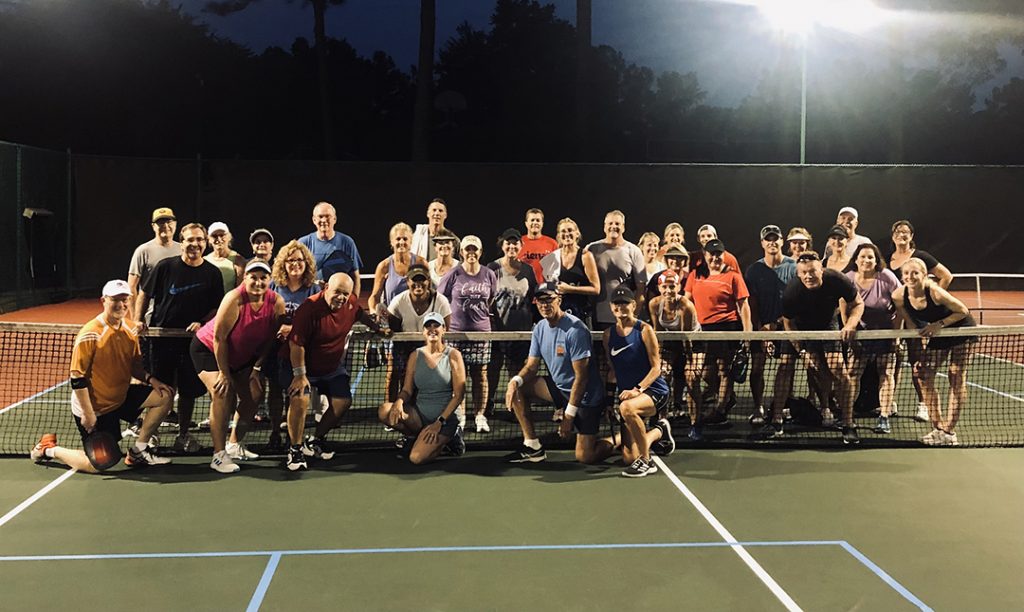