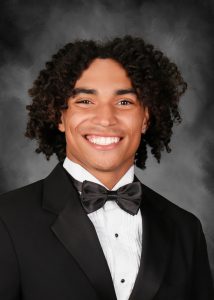 This season, the Etowah High School varsity football team was 5-5, making it a successful year. Members of the community wonder how the players have been able to make a comeback after the losses in the past two seasons. After four years with the Eagles, Frank Mosley, lead cornerback, believes that the team’s success only can improve from here.

Mosley began his football career at the age of 7, after moving from Virginia to Georgia. Yet, he learned many of his team leadership skills from Lane Cantrell, who was a senior at Etowah when Mosley joined the varsity as a sophomore. Mosley continues to offer support and guidance to his younger teammates, just as it was given to him.

“He (Cantrell) taught me what leadership is supposed to look like: encouraging my teammates and picking them up when they are down,” Mosley said.

Dealing with losses during recent years was challenging for Mosley. His motivation on the field made the defeats especially difficult, due to the amount of effort he was putting into the game. However, during his senior year, the team’s hard work finally paid off. He believes these wins can be attributed to the bond the players made this year.

“In the past, we (the team) would gang up on each other when bad stuff happened. But, this year, we came together, and it brought us closer,” Mosley said.

The Eagles have a strict schedule to follow. During the season, the team met every morning to watch film, which is a chance to review past games and reflect on what went right and wrong. After school, the boys headed down to the field for practice, until 6:30 p.m. Of course, Friday nights were designated strictly for games. The morning after, the team had a more in-depth film study.

Over the summer, Mosley created goals for the team, such as winning more games.

“I just worked harder this offseason and pushed my teammates to do the same. It was a common goal for the team, so it was easy getting everyone to buy in,” Mosley said.

Mosley hopes to leave behind a lasting legacy of players continuing to motivate the teammates to strive for success.

– Elizabeth Risinger is a senior and the head of events on The Talon, Etowah High School’s newspaper. She loves reading Percy Jackson and Harry Potter books and writing about topics she is passionate about.