Last week, Elm Street Cultural Arts Village put on their first two shows of Brigadoon, the Lerner and Loewes’ classic romantic Broadway musical. Brigadoon tells the story of a mysterious Scottish village that appears for only one day every hundred years, though to the villagers, the passing of each century seems no longer than one night. Two American tourists stumble upon the village just as a wedding is about to be celebrated, and their arrival has serious implications for the village’s inhabitants. 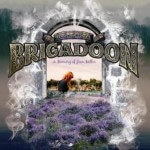 The original production opened on Broadway in 1947 and ran for 581 performances. You can catch it February 17th at 7:30pm and February 18th at 2:00pm and 7:30pm. Advanced tickets are available online as well as at the box office.

This production of Brigadoon is sponsored by Jim Miller in memory of his late wife, Jean Miller. As Director G. Lora Grooms put it, “Bring someone you love to this precious show and hold his or her hand extra tight as you enjoy it.” To find out even more about Jim Miller and the Elm Street Cultural Arts Village production of Brigadoon, go to page twelve in the February issue of the Townelaker magazine.