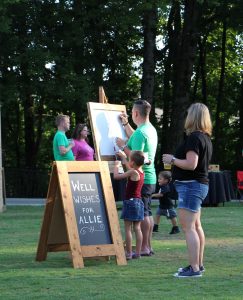 Cherokee County is no stranger to wrapping the community in love and generosity when a need arises. And the community has so artfully illustrated this generosity during the past few months with an incredible, wholehearted initiative called Cherokee Gives A _____. (The blank was added as a politically correct alternative to the real name of the organization, leaving folks to use their imaginations to fill in the blank.)

In May, a handful of community members learned Allison “Allie” Chambers, wife of Jonathan Chambers (community manager of entrepreneurship for the Cherokee Office of Economic Development) was diagnosed with stage four breast cancer. This is Allie’s second round of cancer, after fighting stage two in 2016.
This time, the cancer returned aggressively, spreading to her pelvis, spine, ribs and lungs.

Allie is remaining with her original oncologist for treatment, and they’re taking a cocktail approach to battle the cancer with multiple solutions, including a combination of conventional (chemo, hormone therapy, bone supporting drugs) and alternative (nutrition and exercise, IV Vitamin D) methods. This customized plan typically isn’t covered by insurance, and after a biopsy and most likely hysterectomy, treatments will last 12 weeks and come with a hefty price tag of $75,000. The hysterectomy will put Allie in early menopause, adding more physical challenges and stress.

Within hours of hearing about Allie’s diagnosis and treatment needs, a flurry of Facebook messages, texts and emails began. Shortly thereafter, more than 30 businesses and individuals gathered to discuss this question: “What can we do?”

The result? An association of people that shares a common purpose: to unite Cherokee County to help the Chambers family, through events that raise money and awareness.

Jonathan and Allie’s story comes to life through a raw and heartfelt video created by local visual storytelling duo Half Machine. It’s a reminder of why residents and business owners of Cherokee rallied so hard and so quickly. The six-minute testimonial featuring Jonathan and Allie shares their incredible story in greater detail; the pain, love and strength as they navigate through this second cancer fight.

“Seeing the outpouring with this second round of cancer, it’s crazy. The questions that come on my mind are, (I don’t say it out loud, but) ‘Why do you want to help and where does this come from?’ And I don’t know that I’ve quite discovered it yet, but it feels like this very raw, desire inside of people here locally to actually want to love on people, and love on them practically … The experiences we’ve had trying to do community in different ways, it’s beautiful to watch a community like this that doesn’t really know us that well … to feel like we’re part of that family? Is the ultimate honor.” – Jonathan Chambers

“The way that this community has rallied around us, when most of them have never even met me, they just know my sweet husband, the way that they have just sacrificed their time, energy, their gifts and talents, their money … there are no words to describe how grateful we are for that. This is beyond anything we could ever say thank you adequately for.” – Allison “Allie” Chambers

The location-based events kicked off June 21 with Drink Coffee for a Cause, an all-day event when Alma Coffee donated a portion of coffee and T-shirt sales at their location in The Circuit.

The second event took place a week later in Ball Ground. On June 29, businesses came together in support, offering a day of activities that included a farmers’ market, live music and street performers, a city-wide scavenger hunt, cornhole tournament, and a city-sponsored concert by the Betty Fly Band. The day ended with the city’s annual fireworks show. More than 20 businesses and organizations were involved in planning the event, spearheaded by the owners of Barrel House Coffee Company and the Ball Ground Burger Bus.

The Rest of Us

While the initial kickoff activities were taking place, and even afterward, other businesses around the county have collaborated to create their own events, aligning them with Cherokee Gives A to spread awareness and raise money.

Even with the remarkable success of the first two events, the initiative for the Chambers family is far from over. At press time, more events were being scheduled in Holly Springs (mid-July), Canton (early August) and Waleska (Aug. 31). Members of Young Professionals IN WDSTK are hosting a golf tournament Sept. 24 at the Fairways of Canton called Cherokee Gives a Mulligan. Follow Cherokee Gives A ____ for the latest updates and event details.

As for the future of Cherokee Cherokee Gives A _____, leaders of the initiative agree that this is not a one-off platform for doing good. When another need arises, the platform is already established, and can be mobilized quickly. Jonathan and Allie have said they hope the initiative grows to help others in the community, a sustainable movement that won’t end with just one family.

Of course, change – as well as the persons involved – is expected over time, but the overall hope is that this initiative will be around for the long-term, and spread to include every nook and cranny of our compassionate county.

So far, there are more than 81 sponsors, participants and collaborators, and that number continues to grow. The collective events, social media attention and calls to action have brought the organization to about $20,000 shy of the Chambers family’s target. With more events scheduled, there are plenty of opportunities for additional sponsors and participants to work together.

Donations through Cherokee.gives and the GoFundMe.com/rallieforallie will go directly to the Chambers family. Follow Allie’s Rally Against Breast Cancer and Cherokee Gives A _____ on Facebook and Instagram. 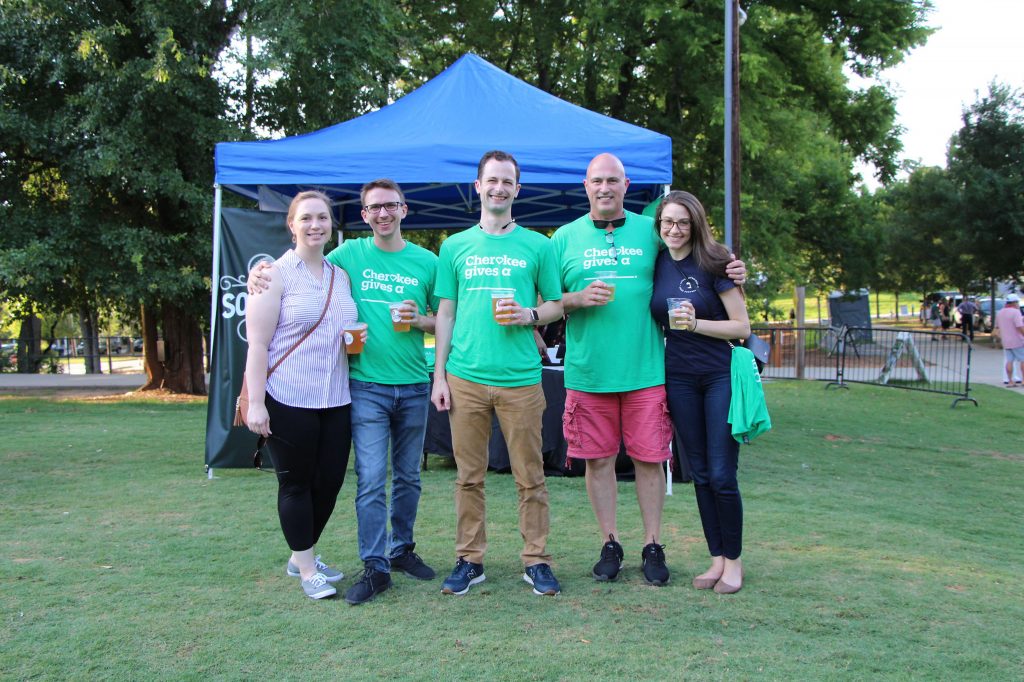