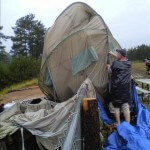 David Youssi, an irrigation contractor who has been camping to raise money for irrigation in Haiti since March of this year, was surprised to see his tent shredded and thrown across acres of open field and his campsite destroyed when he arrived at camp Monday evening (Sept 5, 2011).  A tornado slammed through the Woodstock and Canton, GA area mere hours before he arrived, flattening everything at the camp. Although the destruction was severe, David will continue to be at the site where his tent once stood with plans to continue camping until Christmas in order to get the word out about Camp H.A.I.T.I.  Rebuilding the campsite has already begun. The goal of Camp H.A.I.T.I. (Haitian Agriculture Irrigation Technology Initiative) is to raise enough money to procure materials to install at least one of four Irrigation projects the non-profit is committed too.  A campfire known as the “Fire of Hope” burns every night and visiting hours are from 7pm to 11pm nightly. Stop by and show your support. To donate or for more information about Camp H.A.I.T.I. go to www.irrigationwithoutborders.org