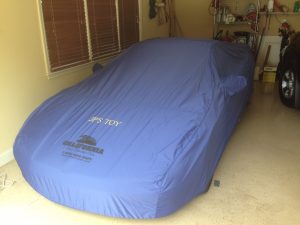 Jerry Porter, a Woodstock resident, talks about his 1996 Acura NSX-T, which he purchased in 1998.

I had long admired the NSX since it originally appeared in 1991. Prior to the NSX, I had always dreamed of someday owning a Ferrari but considered it simply a dream. Then the NSX came along and I set my sights on that. I remember standing outside a closed Acura dealer with my father in 1992, looking at one on the dealer floor with a velvet rope around it. Someday …

My late wife surprised me at my 50th birthday party. It was a Margaritaville-type outside party with all my friends and neighbors. She presented me with a remote controlled version of the NSX and while I was opening that gift, a car rolled up behind me. After I looked at the cool model NSX, I turned around to see who had arrived behind me and instead saw this black NSX with a big gold bow on the hood looking back at me. It was a surreal and memorable moment that I will never forget. The following day I had the privilege of going down and actually arranging the requisite financing. Of course it’s long since paid for and now it is known as JP’s Toy.

Is it just an investment or a forever car?

My daughter (a car enthusiast in her own right) has laid claims to it so it is a line item in our will.

It’s been to South Florida and back, Tennessee multiple times and North and South Carolina. It’s been on many 300-mile plus day trips into the North Georgia mountains, on the Blue Ridge Parkway and through the Tail of the Dragon multiple times.

Why is this car special to you?

It was a longtime dream that I never thought I’d actually realize. It is central in many sweet memories of my late wife and my children. Did I mention that I was driving it the night I met my current wife? She loves it too and we use it for ‘date nights’ and our special occasions.