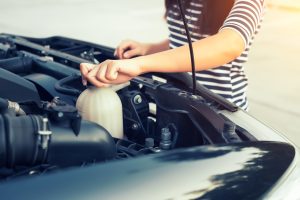 It’s getting hotter, and we appreciate our cooling systems more in the summer. But, no matter the weather outside, your vehicle’s cooling system plays a vital role in how your car operates. For most cars, it’s a system of hoses, channels, pumps and other devices that move coolant around the engine to manage the heat that is produced when the gasoline combusts.

When it’s colder outside, auto service specialists often hear: “What do you mean there is a problem in my cooling system? I asked you to look at my heater.” It’s a little counter intuitive with the way things are named, but your heat also stops working because of a problem with your cooling system.

Not long after, engineers decided that, if systems were simply radiating heat to the open air, they also could radiate that heat into the passenger compartment. But coolant would not get hot enough in extreme cold, which prevented it from generating heat. This led to the addition of the thermostat, which is a specialized plug that stays closed until the coolant reaches a certain temperature, when the plug opens and the coolant is free to cycle.

If your car is cold in the winter, you might have noticed the heat doesn’t work. In this case, the coolant has not warmed enough to open the thermostat and allow the coolant to flow through the little radiator on the inside of your passenger compartment (the heater core). The heat from your engine is the same heat you feel when you turn on your heater.

Over time, there have been air conditioning components integrated into the system to allow for defrosting of the windows, computerized controls and more improvements that, if serviced regularly, keep us cool all summer long.

– Deidre Parker, owner-operator of Chloe’s Auto Repair, holds an ASE certification and has extensive experience in the area of automotive repair.