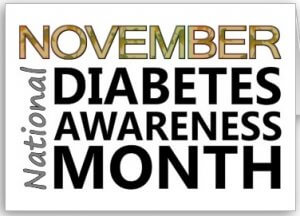 November is Diabetes Awareness Month, and a good time to discuss how diabetes can affect vision. There are two types of diabetes: Type 1, formerly known as juvenile, and Type 2, formerly known as adult onset.  It is estimated that 25 million Americans are diabetic, with 40,000 cases diagnosed annually.  Type 2 is the most common form, and only 5 percent of the population (1.25 million) are afflicted with Type 1. Signs and symptoms of diabetes include frequent urination, dehydration/excessive thirst, weight loss, fatigue, increased appetite and fluctuating vision.

Diabetic retinopathy is the leading cause of blindness among Americans under age 74, and affects the vision of more than 18 million people over age 18.  Vision loss occurs when the blood vessels in the retina become weakened and rupture, causing bleeding in the back of the eye. There are two forms of diabetic retinopathy — proliferative and nonproliferative. The more common is nonproliferative, where there are small leaks from the retinal capillaries, which usually does not cause serious vision problems. In proliferative diabetic retinopathy, new blood vessels begin to grow, large hemorrhages occur, and the retina may detach, causing severe loss of vision. This extensive bleeding and new blood vessel growth require laser treatments to prevent further retinal damage.

Studies have confirmed that control over blood glucose levels greatly reduces the development and progression of diabetic retinopathy in both Type 1 and Type 2 diabetics. Controlling blood pressure and cholesterol levels also helps to lessen the adverse effects. The American Academy of Ophthalmology states that 80 percent of those with diabetes for at least 15 years have had some damage to the retina due to diabetic retinopathy. If detected early, damage and vision loss can be minimized. The National Eye Institute reports that vision loss from diabetes can be prevented 90 percent of the time with early detection and yearly dilated eye exams.

Seeing your eye doctor regularly not only will help to prevent vision loss, but also may save your life. Unusual changes in your prescription, as well as retinal signs, will lead most optometrists to recommend blood work to be sure sugar levels are normal. Hundreds of thousands of people have no idea they have diabetes until they have an eye exam. Be sure yearly exams are a priority for everyone in your family, infants to elderly; no one is immune to this disease.

The American Optometric Association recommends a child’s first eye exam occur between the age of 6 and 12 months. This comprehensive exam is part of the AOA’s InfantSee Program; the exam is free if the infant is younger than 12 months. While it is less common to see eye and systemic diseases in kids, diabetes can affect persons of any age, and dilated eye exams are the first line for early detection.

By Dr. Jennifer Dattolo, contributing writer and optometrist at Eyes On Towne Lake.