April is National Autism Awareness month. In honor of this, here are a few facts about autism, what it means to raise awareness, and more.

To preface, this is a very short briefing on a very complex disorder.  Autism spectrum disorder (ASD) and autism are both general terms for a group of complex disorders of brain development. These disorders are characterized, in varying degrees, by difficulties in social interaction, verbal and nonverbal communication and repetitive behaviors. While traits start in early brain development, it is not until around ages 2-3 that they emerge.

What does autism awareness raise money for?

With 1 in 68 Americans being diagnosed as somewhere on the ASD spectrum, and rising, autism awareness month raises funds for research, educates on identifying and coping with autistic traits, and celebrating these beautiful individuals. To give you an idea of how talented an autistic child or adult can be, look at the works of Iris Grace.

Through recent research, the cause of ASD was for long “we have no idea” but we now know, there are a number of rare gene mutations linked to autism along with environmental factors influencing early brain development. Thanks to funding, organizations such as Autism Speaks are working with researchers to increase awareness and investigation of ASD.

What is the symbol for autism awareness? 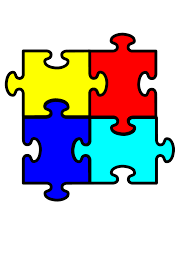 The Puzzle Piece symbol (to the right) is a perfect symbol for autism. It reflects the mystery and complexity of Autism Spectrum Disorder (ASD) on multiple levels. For one, every puzzle piece is different, representing the diversity of the individuals affected. The more research we have, or the more puzzle pieces, the closer we come to fully understanding ASD.