Doris still has a twinkle in her eye and a beautiful smile on her face. When asked what her secret is to living to be 100, she said she’s always been a happy, joyful person, who has always loved working and helping people in need. She always exercised, walking for miles each day and working out to Jack LaLanne. She loved having a cocktail every happy hour with her husband during their 50 years of marriage.

Born in Detroit Lakes, Minn., Doris grew up in Northern Wisconsin where her father was a bridge builder. She has vivid early memories of her family packing up as soon as school was out for the summer to go to whichever site her father was working on, where they slept in a tent with no running water or plumbing. For fun and to earn a little money, Doris picked raspberries and strawberries for the local farmers during the summer. When she was older, she became the local paper girl, delivering papers from her bicycle or if she was lucky, from the back of her dad’s truck during the school year.

The one-room school house was close by, and when Doris was 4, she started following the older children to school. The first few days, the teacher would call Doris’s mother to tell her Doris was at the school. After about a week, the teacher said Doris was behaving and learning, so why not let her stay.  She did, and graduated from high school when she was 16.

Doris’ family had the only radio in town, so any time there was a major event, all the townspeople would crowd into her family’s home and porch to listen. She can still picture being at the dining room table with her family when the announcement was made that Pearl Harbor had been bombed.

During the war she became one of the original “Rosie the Riveters” when she went to work at the Ford Motor Company at Willow Run, producing parts for the B24 Liberator bomber planes.

Throughout her adult life, Doris loved crocheting, knitting, arts and crafts, and singing in the choir. 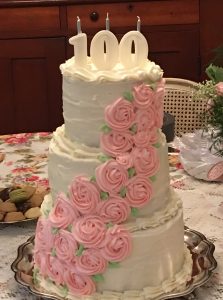 When asked what advice she would give to the younger generation, she said they should always be kind, help each other, don’t be afraid of hard work, and to be frugal with their money!

Update: We are sad to report that Doris passed away Sept. 2. According to Connie Merten, “It’s as if she just wanted to reach 100 and then was ready to die peacefully.”