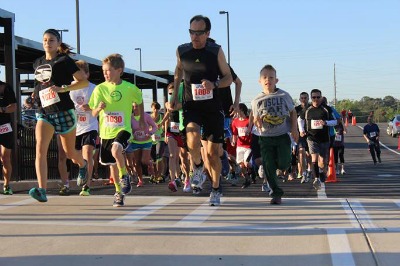 On Saturday April 26, runners and walkers, young and old, stepped off the starting line as Good Shepherd Lutheran Church in Woodstock, Georgia hosted the “Malaria Bites” 5K Run/Walk. As part of the Evangelical Lutheran Church in America’s (ELCA) Malaria Campaign, the run/walk was founded to help prevent deaths from this deadly disease and held in conjunction with World Malaria Day, April 25.

“A child dies from malaria every minute,” said GSLC Outreach Coordinator, Kristin Brenneman. “In a few short hours, Good Shepherd, and the entire community, was able to raise more than $10,000 for the ELCA Malaria Campaign,” she explained, adding the campaign’s goal is to raise $15 million by the year 2015. Thanks to generous local sponsors who paid for the race operations, Good Shepherd Lutheran Church was able to donate every dollar of the race entry fees to the ELCA Malaria Campaign.

The 5K brought 187 inter-generational participants together in the community-wide event. “Ghost runners were welcomed and encouraged to participate,” Brenneman added, defining a ghost runner as someone who donates money through their registration fee but does not actually run or walk. Besides those who ran or walked the race, volunteers from the local high schools and other organizations helped with race-day activities.

While Good Shepherd Lutheran Church raised $5,400 on or before race day, the total donated to the Malaria Campaign grew to $10,800 thanks to a matching program available through the ELCA. Brenneman noted the money helps provide insecticide treatments, test kits, education and treatment for those in danger of contracting this deadly disease. Deaths from malaria have dropped by 25% since the ELCA joined the World Health Organization in its effort to eradicate this completely preventable disease.

The fastest runners/walkers in age divisions received a medal with the overall male runner trophy awarded to Mike Stafford of Marietta with a time of 17:02:00 and the overall female runner trophy given to Caitlyn Farrell of Canton with a time of 21:42:00. “The real winners are the women and young children who can now be protected and especially those in Naimibia, where the ELCA hopes to start a program which would prevent and treat malaria,” Brenneman said.

Good Shepherd Lutheran Church is located at 1208 Rose Creek Drive, at the intersection of Eagle Drive, in the Towne Lake section of Woodstock. For more information, please call 770-924-7286 or visit www.gslutheran.org.