She was born in 1916, out in the country near Kings Mountain in Cherokee County, South Carolina. Aileen told us, “That’s the same mountain where my great-grandfather, Lt. Col. Frederick Hambright, fought the Battle of Kings Mountain during the American Revolution.”

The second oldest of eight children, she said it was fun growing up in the country. “My seven siblings and I picked cotton and vegetables, and helped Mama do the cooking and cleaning. I remember milking the cow out in the barn, and I would feed the cat while doing so. I had good aim! That milk shot right across the way, into that cat’s mouth,” Aileen chuckled.

Aileen and her siblings received their education in a one-room schoolhouse started by their mother. “Education was important to Mama,” Aileen said, so she hired a teacher to teach her and her siblings, as well as the other children in their community. Aileen went on to attend business school in Charlotte, N.C., and on Nov. 8, 1940, she married Alvie D. (A.D.) Cantrell. 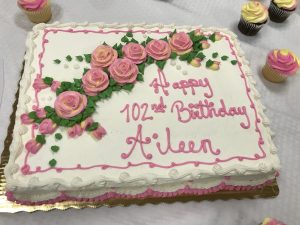 A.D. and Aileen owned the Western Auto Store in Davidson, N.C., and Aileen was the Western Union representative for the area. They had two children, Al and JoAnn, and Aileen was one of the original parents involved in establishing the town’s Little League baseball program. She and A.D. remained married until his death in 1968.

Today, Aileen enjoys spending time with her children and their spouses, her four grandchildren and seven great-grandchildren. While sewing and crocheting used to be favorites hobbies, these days she enjoys coloring with colored pencils.

When asked about the secret to her longevity, Aileen said, “Genes, good food, a balanced diet, plenty of exercise and being a Christian.”

And what wisdom does she want to impart to today’s youth? It’s simple. “Do the right thing, be kind, and don’t hurt anybody.”